In the past few years I’ve been doing food themed new years resolutions, and this year I decided to do a year of preserving things. Partly because I got a new toy, and partly cause I was doing so much of it already. And it’s such a broad category, I figure I can play with the new smoker, pickle things and maybe learn some new stuff.

I decided to make some pastrami as one of my first preserving projects. Mostly cause I’m obsessed with the pastrami hash at Saul’s in Berkeley, and I’ve been secretly trying to recreate their entire menu.

So after I procured 7 pounds of beef brisket, I started my research in earnest. This is where I hit the first problem. Pastrami is just beef cured with salt and then smoked. Easy right? But no… Pastrami purists debate between dry cured vs a wet brine cured pastrami. The dry cure camp says it produces a better flavored pastrami, but can be overly salty and dry. The wet brine camp says it makes the meat more moist and takes less time but can make the meat taste mushy. Then I remembered the whole dry brining process we tried for Thanksgiving, it’s essentially just rubbing salt on meat and letting it sit in it’s own jucies. Sounds appetizing right? Well, it worked great! 7 pounds of beef actually gives off a lot of fluid when you apply salt to it, and this kept it perfectly moist. Not to mention much less of a pain than a giant tub of salty beef in the fridge.

The other big decision is whether to use curing salt, aka sodium nitrites or not. If you walk in a Whole Foods these days, there are plenty of “uncured!” and “no added nitrite” products. Well, Michael Ruhlman has a nice post about it here. Apparently a lot of these “uncured” products does it using added celery juice or powder which contains nitrites. That seals the deal, sodium nitrite it is. Besides, it prevents botulism which is good enough for me!

I decided to dry brine the pastrami for 2 weeks. After the curing process, I coated it in pastrami spice and smoked it for 6 hours over some hickory chips. Then I wrapped the whole thing in foil and cooked it in the oven until tender. The BBQ enthusiast will recognize this as the “Texas crutch“.

Results? Freaking fantastic. Smokey, moist, fatty and salty. Pretty much the perfect pastrami! Yes, a huge pain the ass and and not sure economically worth it. After trimming, curing, smoking the almost 7 pounds brisket produced around 4.5 pounds of pastrami. But man, is it ever tasty!

I served it as a sandwich during a football game and of course, pastrami hash!

2) Cover the brisket throughly in the dry rub and place in a 9 x 13 pyrex pan. Wrap tightly and place in fridge.

3) Cure the brisket for 14 days. Flip the brisket every few days. Be careful, there will be a fair amount of liquid in the pan.

4) On the 14th day, take out the brisket and raise off any spices stuck to it. Pat dry with paper towels.

6) Start up your smoker! Smoke the pastrami for 6 hours.

7) Pre heat the oven to 325F. Wrap up the pastrami in foil and place in a pan, then bake until the pastrami is tender but not falling apart. Mine took about 2 hours or so.

8) Now you can eat it! If you want, you can also flatten  the pastrami into a more even shape by weighing it down with a few heavy pans over night in the fridge. The pastrami is easiest to slice when cold. To reheat it for sandwiches, I slice off a few pieces and steam them.

Next time I’ll tell you about making my own bacon!

Oliveto, a pillar of the Bay Area Italian dining scene, does various theme dinners throughout the year, one of which being Whole Hog. True to the name, the menu celebrates the beauty of all things pig, tip to tail. It should have long ago become clear to our eight loyal readers that we are unusually obsessed with pork, and this dinner is simply the annual climax of said obsession for us and those like us.

Princess was sadly unable to make it to town for the glorious event, and Yuan experienced an extremely ill-timed bout of poor judgment and turned down the chance to join. So I headed off with a small band of die-hard food lovers to worship at the temple of the hog…

We started off with the “whole cuts” plate of dry-cured salumi, which included prosciutto, coppa, lonza, lardo, pancetta, and another one the name of which escapes me. Standouts included the lardo, which was cured with rosemary and simply sublime, and the meltingly rich and delicately salty coppa.

Next I moved on to the terrine of pickled pig ears with horseradish, celery hearts and frisee. This is the only thing I had the wherewithall to photograph, before becoming lost in a porky fog of bliss. (Also the lighting was a little low for my trusty point-and-shoot.) 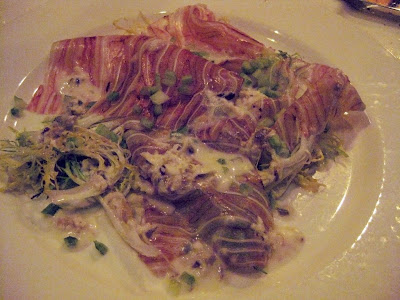 The terrine was soft and silky, in oh so pleasing contrast to the crisp frisee. The whole dish was perky and memorably whimsical, and I was convinced I’d ordered the best appetizer until one of my dining companions turned to me on the brink of joyful tears over his fritto of pork tripe, sweet onions and cardoons with meyer lemon and caper mayonnaise. Sweet heavenly lord was that delicious! Tender, crisply fried, unexpectedly a little bit clovey-cinnamony-warm, dunked in a little perky mayo…. The stuff, literally, that dreams are made of.

My entree was a hearty peasant-style braise of borlotti beans, gloriously fatty pork shoulder, little cotechino sausages, and assorted other little pork bits. Others had blood sausage, ravioli in brodo, and choucroute garni featuring perhaps one of the best ideas I’ve ever heard – pork “pastrami.”

Even the desserts were pork-tacular. Mine was a caramel and Valhrona chocolate tart with candied pancetta. The salty pancetta balanced nicely against the sweet caramel, both melding perfectly with the rich dark chocolate ganache. Also devoured: blood orange and bacon ice creams, and an apple strudel topped with candied bacon bits that was easily the best dessert of the three.

I tell you, this whole hog business is sheer genius. Thank god it only happens once a year, or I’d be dead broke and weigh two hundred pounds. Aside from those, though, I’d probably be quite happy.