Since Little Miss did an entire post on how I never make pies, I made a spite pie last weekend for a BBQ using the beauteous blue Auberge pie plate that she rejected and Yuan so graciously gave me.  Eat your heart out Little Miss!

Here in Davis, summer is just around the corner and the farmer’s market bounty yielded some fat blueberries and sweet nectarines and peaches, which inspired me to revisit Mrs. Scott’s blueberry peach pie!  Growing up in East Hampton, I had the pleasure of having unfettered access to Mrs. Scott’s amazing baked goods.  I don’t even like sweets and seriously, I couldn’t stop eating anything this woman baked.  Oh, I couldn’t possibly eat this giant piece of cake, oh, where did it go? IN MY BELLY.  I actually used to go to her house late night to scavenge on her leftover desserts after her dinner guests had left. Whenever I see her, she always makes sure that she has my favorite banana chocolate chip muffins.  I love you Mrs. Scott!

But I digress, Mrs. Scott makes the best blueberry peach pie ever.  I attempted this pie two years ago, and while it came out pretty yummy, it was not the same.  This time, I actually called Mrs. Scott for her recipe and I now share this precious knowledge with our loyal readers!

For the crust, I used Dorie Greenspan’s Good For Almost Everything Pie Dough and combined 3 cups all-purpose flour, 1/4 cup sugar, 1 1/2 tsp salt, 2 1/2 sticks of frozen unsalted butter (cut into tablespoon pieces), and 1/3 cup of frozen vegetable shorting (cut into four pieces) in a food processor until the butter and shortening were crumbly and pea-sized.  Then I gradually added about 6 tbsp of ice water while pulsing until the dough stuck together.  I split the dough in half, wrapped the dough disks in plastic wrap and refrigerated it for about a hour.  I rolled out the dough disk between some floured parchment paper until it was about 1/8 inch thick, fitted it into the pie plate, tightly plastic wrapped it, and froze it – mostly because I didn’t have room in the fridge, but I think it made the crust extra flakey.   I rolled out the second dough disk into another 1/8 inch thick round, wrapped it and put it in the fridge for a hour.

Mix fruit, sugar, and tapioca in a bowl and let it stand for 15 min.  Turn it into the pie crust and dot with butter.

Moisten the edges of the bottom pie crust and cover with the top pie crust.  Seal the edges and cut four slits and a middle circle into the top of the pie.  Brush top with egg wash, sprinkle some sugar on top then bake in the oven for 50-60 min until the crust is golden brown in a 400 degree oven.  Let it cool down to room temperature and serve.

Bjorn made homemade peach ice cream to accompany my beautiful pie.  And while the pie wasn’t quite as good as Mrs. Scott makes it, apparently everyone at my BBQ loved Mrs. Scott’s pie as much as I do because this is what the plate looked like within 30 minutes of me putting it on the table. Summertime berry pies rock my world. My friend Meg’s mom made the best blueberry peach pie and it’s one of my favorites (the other being strawberry rhubarb). Little Miss came out to Davis and we couldn’t resist these delicious looking berries. 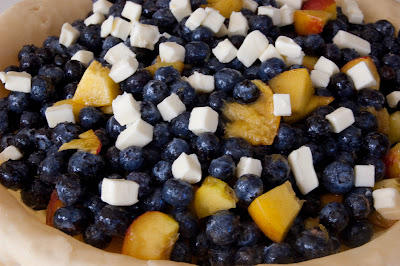 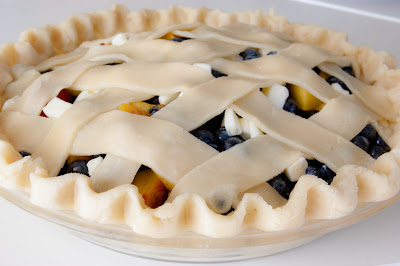 Fresh out of the oven. Yum! 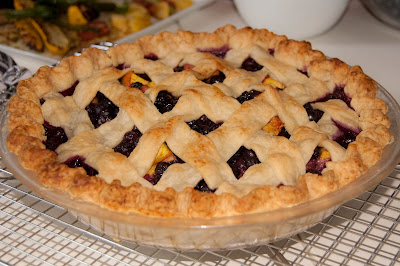