A couple weeks ago, my friend Heather asked me if I wanted to take an Artisan Cheese Making class. We decided we wanted to stay away from blue cheese because the thought of at-home stanky blue cheese ripening did not sound appealing. We picked goat cheese because of the high probability of the instant eating of the chevre and because the Camembert class was full. Last week, we walked to our goat cheese class where we ended up making not chevre, but goat brie. This subjective change of plans initially made me nervous especially when I sat down to some class materials with words like “white fuzzy mold” and “cheese mites.” But the class ended up being pretty fun and now I’m an obsessive cheese mother, having to care for my cheese while it ripens. I actually couldn’t sleep one night because I was worried I had forgotten to flip my cheese that day. It’s going to take about 4 weeks for my cheese to ripen so I thought I’d track its progress here. The thing about home artisan cheese making is that it’s WAY cheaper and faster to just go and buy your cheese. Cheese making requires a lot of weird bacteria, molds, cheese molds, equipment, sterilization solutions – most of which you have to buy online, and patience while you care for it while it ripens. But I thought the class was really fun because I learned about what goes into the transformation of milk product into cheese product and allowed me to make my own brie without having to buy all the weird powders, drops and molds. We also got to sample some homemade ripened goat brie and it was delicious, so I’m keeping my fingers crossed for my hopefully edible project.

First, we heated 2 quarts of pasteurized goat milk (NOT ultra-pasteurized) to 88 degrees in a sterilized pot while stirring gently with a metal spoon. We then sprinkled some powdered things in packets (1/16 tsp of mesophilic culture and 1/8 tsp of Flora Danica starter mold) on the surface of the milk, stirred and let it sit for 15 min. Then we put some stuff in tiny squeeze bottles (1/16 tsp of calcium chloride and 20 drops of Malaka rennet) in 1/4 cup of water and added it to the milk. After letting it sit for 45 min, the milk had formed into a jello-like curd that we then cut into cubes and gently folded to separate the whey or the water that had separated from the solids. The curd was then drained through a cheese cloth then we packed them into a log mold and a mold I made by poking holes in a plastic yogurt container. We left the curd draining in the molds for 10 min then I brought it home and let them sit overnight in a glass loosely covered by some plastic wrap. 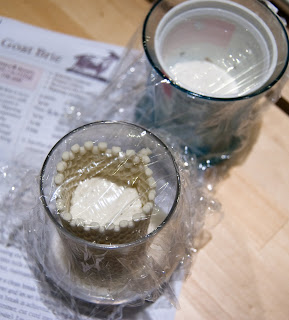 After spending the night at room temperature, I flipped the cheese, lined a ziplock with paper towel and gently placed it in the fridge where it remains for 3 days. I’ve been flipping the cheese once a day for even drainage and distribution of whatever is in the cheese. Next up, salting and ashing…stay tuned!