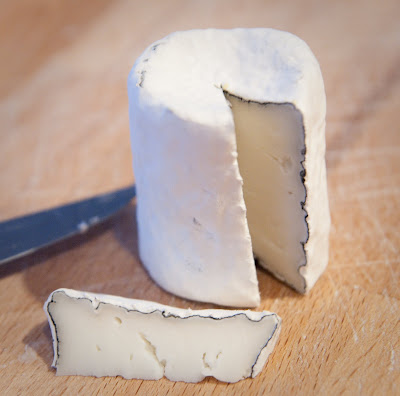 On Christmas Eve, three months after I first began this molding-cheese-in-my-fridge endeavor, I finally did it. I ate my goat brie. Yes, loyal readers, I have eaten my home-molded cheese and have survived to tell the tale. In fact, it was even delicious! Best goat brie ever! My cheese had a creamy complexity of flavors and seemed to reveal new flavorful facets as you ate it. Basically, it tasted like really yummy brie with a slight hint of tangy goat. 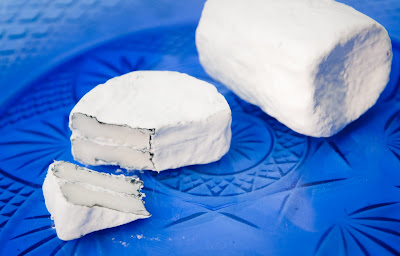 Originally, we were told that the cheese had to ripen for about 4 weeks but after Heather tried hers, she suggested we ripen longer. For the first month, I was a diligent, perhaps even an obsessed cheese mother – worrying about the cheese, mentioning the progress to anyone who would listen, changing the damp paper towels in the little ripening house, and flipping the cheeses every other day. I reveled in their moldiness, watching as my little log and half moon turned grey, white, and covered in super fuzzy shroud of mold. I carefully patted the fuzziness down, forming the distinctive brie skin. Then, I forgot about it. It sat in the butter shelf of my fridge, a minor annoyance every time I went to get a stick of butter. Thankfully, allowing something to mold in your fridge for three months and forgetting about it did not lead to any food decay that would render cheese inedible. It probably helped. The cheese was on the harder side of brie which I attribute to fridge ripening, and I’d like to experiment with winter basement ripening in the future to see if it would result in a softer brie. I’d also like to make bigger cheeses so I can slather it onto baguette slices with reckless abandon instead of carefully placing each precious cheese slice on a cracker and making sure to enjoy every bite. Should the opportunity arise to make artisanal cheese at home, I recommend it. The whole process probably only took about 3 hours of active preparation time. I found it to be a fun adventure with an element of danger (maybe just in my head) and I got to eat it in the end. Win!

One thought on “Goat Brie – The End.”