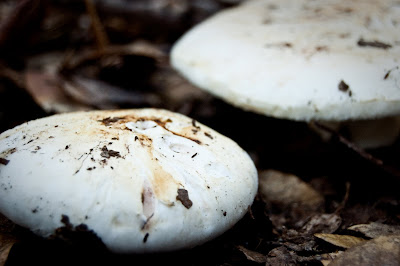 Every fall, the people of Japan eagerly await matsutake season and pay an absurd amount of money to consume this delectable and distinctively fragrant fungi. Here, the close North American cousin of the Japanese matsutake is tricholoma magnivelare and although it is not as popular as Japan’s tricholoma matsutake they are very similar in texture and smell. Oh, the sweet sweet matsutake aroma…

I hounded the mushroom vendor at the farmer’s market for almost two months in search of the cherished mushroom and finally purchased 4 small mushrooms for $30/lb. I excitedly told a friend about my great triumph in obtaining my precious matsutake to which he replied, “oh, I just went hiking on the coast and they were growing all over the place. I’ll take you if you want to go tomorrow morning.” I immediately forgot that I’ve been told my entire life never to pick your own mushrooms for fear of death, and got up at 7 a.m. (believe me, this is EARLY for me for a Saturday) to drive to go mushroom picking.

We went down a trail, then bushwacked into the woods a bit, and lo and behold! A MATSUTAKE! I couldn’t believe it! It smelled like the real thing, looked like the real thing, and was growing out of the ground! I squealed like a teenager at a Jonas Brothers concert and did a little happy jig. Jake taught me to look in the leaf litter for slight mounds near tan oak and huckleberry bushes, and the distinctive characteristics of the matsutake, like the shreddable stem, white color (some with brownish discoloration), and gills attached to the stem, which is covered by a partial veil. Then he showed me how to pry them from their leafy beds. 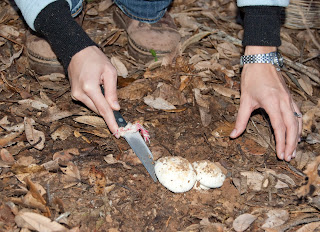 When I started the day, I made a personal goal to find at least one matsutake during the trip but once I started to recognize what to look for, they were everywhere!! Then I really hit the motherlode. I saw a small white button peeking out from beneath the fallen leaves and as I was uncovering it, I noticed that there was an half arc of them. 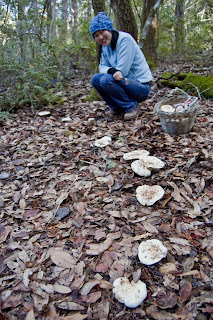 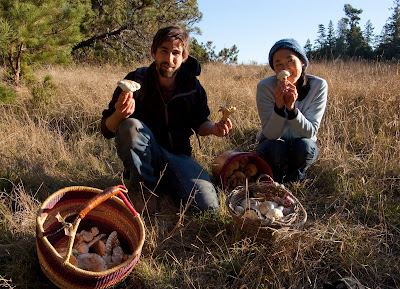 By the time we stopped for lunch in this awesome field, we had collected almost three bucketfuls of matsutake. On the way back to the trail, we stumbled upon a patch of chanterelles, including the prettiest chanterelle I have ever seen! I ate an all mushroom diet the next day, then spent about 24 hours worried about dying of renal failure due to some deadly mushroom I had just consumed, but remembered that I definitely know what matsutakes smelled like and really, nothing else smells like it. I’m also still alive.

Over the course of the last month, I have been experimenting with various mushroom recipes. Usually, you try to find ways to economically stretch out the precious fungus that you paid an arm and a leg for and you barely have enough to make the two matsutake classics, matsutake soup “dobinmushi” and matsutake rice. I made a matsutake dashi and steamed some rice with the broth, a splash of sake and soy sauce, and sliced matsutakes. The steam from the rice cooker filled my house with that wonderous pungent piney aroma. 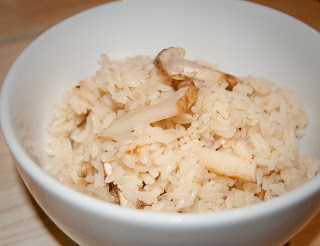 I gave some to the local Japanese restaurant owner (who then gave us some complimentary treats!), I froze some for later, and made mushroom dashi which I keep in the freezer. I also made matsutake noodle soup, matsutake dumplings, matsutake egg custard (chawanmushi), and various chanterelle and matsutake omelettes, pastas, and sautees. The chanterelles were meaty with the most amazing buttery texture and the matsutakes infused everything with their wonderful matsutake fragrance. Highlights were a shellfish pasta with chanterelles and matsutakes, and this simple but savory matsutake butter saute with ginger and homegrown chives. Thanks to Jake and mother nature for a matsutake adventure in deliciousness.

2 thoughts on “Matsutake! Mushroom of My People”