I’ve learned an important lesson about self restraint, dear readers, that I feel I must share with you. Self restraint is entirely overrated and should be avoided at all costs. Yes, I know, it’s a controversial point of view, but hear me out. In the planning of Thanksgiving dinner, by the time you get to the desserts you’ve got so much on the menu before it that one might be inclined to go easy or, worse yet . . . light . . . on the desserts. This year’s menu confirmed what the hedonist in me has always suspected/hoped to be true – ’tis far better to never hold back. Live your dreams! Does it seem preposterous, maybe even sinful, to round out a dessert course following twelve or thirteen other dishes with a cheesecake? Of course it does!! That’s exactly why you do it. There are only a few times of year when this sort of conduct is at all acceptable, so it would be almost criminal not to make the most of them while we can, right?? Right. 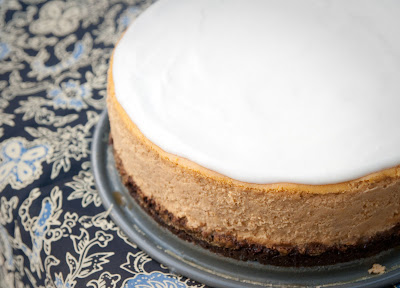 Turn crumbs into prepared springform and spread into even layer. Using a flat-bottomed ramekin or glass, press crumbs evenly into pan bottom, then use a soup spoon to press and smooth crumbs into edges of pan. Bake until fragrant and browned around the edges about 15 minutes. Cool on wire rack.

Bring 4-5 quarts of water to simmer in stockpot. Whisk sugar, spices, and salt in small bowl; set aside. Line a baking sheet with a triple layer of paper towels, then spread pumpkin over towels in a roughly even 1/2-inch layer. Cover with another triple layer of paper towels, press firmly until saturated. Peel off top layer, fold dried pumpkin over itself to remove bottom layer, set pumpkin aside.

In a standing mixer fitted with flat beater, or in a large bowl using a hand mixer, beat cream cheese at medium speed to break up and soften slightly, about 1 minute. Scrape beaters and sides of bowl with rubber spatula. Add about 1/3 of the sugar mixture and beat at medium-low until well combined, about 1 minute.

Set springform pan with cooled crust on an 18-inch-square double layer of heavy-duty foil and wrap bottom and sides. Set wrapped pan in roasting pan. Pour filling into springform pan and smooth surface, set roasting pan in oven and pour enough simmering water to come about halfway up the side of the springform.

Bake until center of cake is slightly wobbly when pan is shaken, and center of cake registers 150 on an instant-read thermometer, about 1 1/2 hours – but check it after 1 1/4 hours just in case. Set roasting pan on wire rack and use paring knife to loosen cake from sides of pan. Cool until water is just warm, about 45 minutes. Remove springform from water bath, discard foil, and set on wire rack. Continue to cool until barely warm, about 3 hours. Cover with plastic wrap and refrigerate until chilled, at least 4 hours, or up to 3 days.

Stir marshmallows and milk in medium saucepan over low heat until marshmallows are melted. Remove from heat and stir in vanilla and salt. Cool marshmallow mixture to room temperature, stirring occasionally.

Add sour cream to marshmallow mixture, fold gently to blend (whisk gently if needed to get rid of any lumps). Pour over cheesecake and spread evenly, leaving a thin border uncovered at the edge. Chill to set, at least 1 hour.

One thought on “Nothing Says Thankful Like Pumpkin Cheesecake”